The name Johnny Cash probably doesn’t ring any bell. Finally, yes, I imagine some of you know of a country singer who owes particular credit to the excellent Ring of Fire, or biopic Walk the Line (which I highly recommend), but it’s not really the topic of this article. Today I’m talking about Johnny Cash who has been at Blizzard for over 12 years and who announced his departure last weekend.

Arriving in Irvine in 2013, he first held the position of Associate Game Designer at Warlords of Draenor. He specifically supervised the Talador District. He then moved on as a game designer at Legion and did tremendous work on artifacts, which will undoubtedly remain the cornerstone of his work at Blizzard. He also worked a lot on pet fights.

In the following years, he worked on Battle for Azeroth before moving to Senior Game Designer in 2019. He then became responsible for Bastion area content in Shadowlands. On this occasion, he started making a name for himself in the media as he participated in several promotional interviews.

Over the past year, his role as Lead Quest designer has become more ambiguous, and no doubt he’s been working on the next expansion, ensuring that the game’s overall narrative context is created. Part of his job was also to define task standards on WoW, as well as to ensure teams were followed up on the topic.

At this time, it is not yet clear what the future of Johnny Cash will be. Perhaps he will join other former employees of Notorious Studios, Frost Giant or Lightforge Games, or launch his own team. music band development studio. Anyway, we wish him good luck in the future! 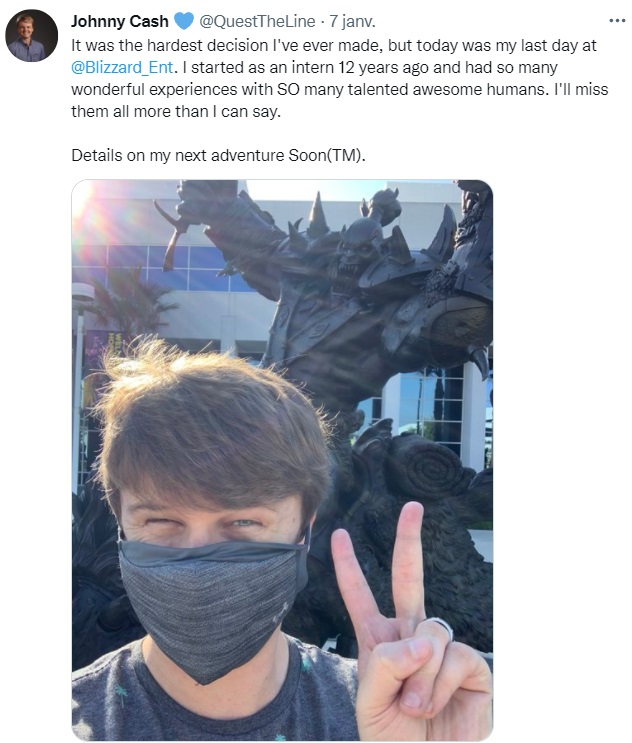