Windows 11 introduces many new features. They affect many areas, in particular the interface. A new Start menu, icons centered on the taskbar, circular corners or even floating windows are planned.

Since the first preview was posted on the DEV channel for Windows Insider, other changes and developments have been discovered. The latest ones raise new alerts and recommendations. It is activated if a change to the default setting is observed.

Concretely, Windows 11 like Windows 10 or Windows 7 in its time was suggested with a certain profile. So it is not impossible that some of its default settings do not offer the best possible performance. In this case, the various customization options allow you to give your own personal touch. If an unrecommended change is made, a new notification will appear in All Settings. Its goal is to suggest a return to the default setting by undoing the various modifications that have been made.

In the following example, a change was made to screen power management on a device with a battery (the latter no longer allowing to turn off completely). The following message has been observed

Generally, these various alerts/recommendations are accompanied by an action button. Its role is to operate the machine in reverse to return to the recommended parameters.

The recommendations are not limited to the original Windows 11 profile, but also apply to certain services. For example, a reminder may appear as the end of your Microsoft 365 subscription approaches. 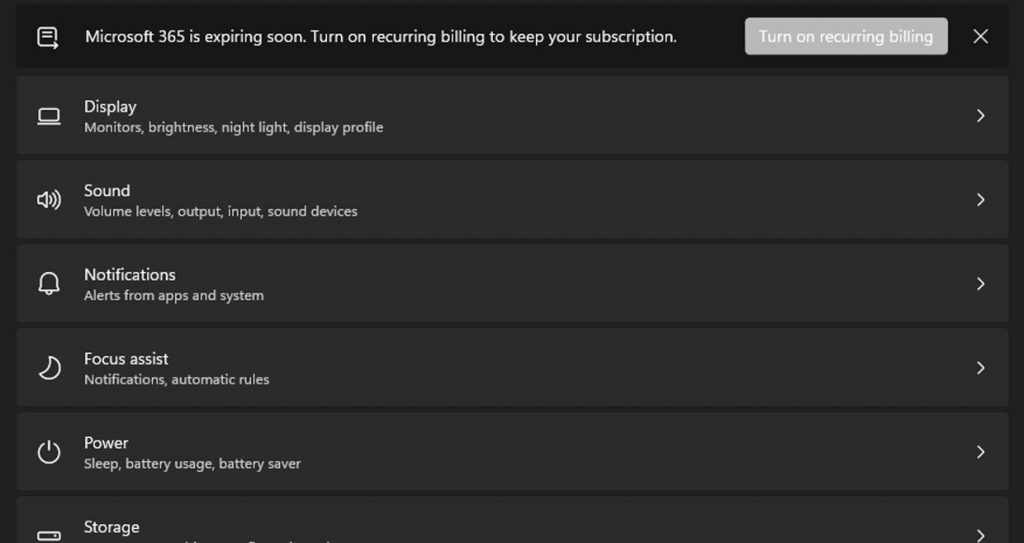 Windows 11 also takes advantage of NVMe SSD drive health monitoring. If there is a hardware issue, an alert is triggered early enough to set up a data backup. At this time, this feature only affects NVMe SSDs.