New measures, new reports, and highlights: An update on the latest developments in the Covid-19 pandemic around the world.

Experts from the World Health Organization, in turn, felt that the benefits associated with this vaccine outweighed the risks. About 15 countries suspended it as a precaution, fearing dangerous side effects.

On the other hand, you will wait for Denmark, Norway and Sweden. Finland announced the suspension on Friday at least until March 29.

In France, the health authority recommended Friday that it be reserved for 55 years and more.

Angela Merkel and the leaders of the 16 states will meet on Monday to decide on possible new lockdowns. The German Chancellor said she is ready to order the Russian Covid Sputnik V vaccine for her country if it is authorized by the European Union, while she has been widely criticized for the slow pace of the vaccination campaign in Germany.

Belgian Minister of Health Frank Vandenbruck confirmed that Belgium recorded a week ago an “outbreak” of new infections and an acceleration of hospital treatment, which requires “tightening the screws” on restrictions and the barrier gestures.

International aid is too slow to avert a health disaster in Papua New Guinea, which is experiencing a pandemic, according to an official from Doctors Without Borders (MSF).

– The Group of Seven to provide new aid to poor countries –

According to a press release from the British Treasury, the Group of Seven finance ministers, who met via video link on Friday under the auspices of the United Kingdom, are supporting new aid to disadvantaged countries weakened by the pandemic, through the International Monetary Fund. 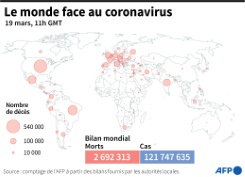 US health authorities have relaxed the recommendations in effect in schools to confront Covid-19, by reducing the recommended distance between students in the classroom.

Norwegian police have opened an investigation after the embarrassing revelation that Prime Minister Erna Solberg and her family had violated anti-Covid guidelines. The prime minister apologized.

On her 60th birthday at the end of February, Solberg gathered her family at a ski resort, bypassing rules and recommendations to limit social interactions, NRK public broadcaster revealed.

Rio de Janeiro announced the closure of the beaches of the Brazilian giant this weekend in an effort to curb pollution, when hospital admissions in intensive care reached a record high.

The epidemic has killed at least 2,692,313 people worldwide since the start of the epidemic, according to a report prepared by AFP from official sources on Friday at 11:00 GMT.

These figures, which are based on the daily reports of health authorities without including statistically based reassessments, are generally underestimated.

© 2021 AFP. All copyrights and representations are reserved. All information in this section (transmissions, images and logos) is protected by the intellectual property rights of Agence France-Presse. Consequently, none of this information may be reproduced, modified, redistributed, translated, exploited commercially, or reused in any way without the prior written consent of Agence France-Presse.