New Measures, New Reports, and Highlights: An update on the latest developments in the Covid-19 pandemic around the world.

– Austria: unvaccinated non-vaccinated ones from Monday –

Austrian Chancellor Alexander Schallenberg announced the start of the lockdown on Monday for people who have not been vaccinated or who have not recently contracted Covid-19, a first in the European Union aimed at stopping the record number of new cases.

The persons concerned will not have the right to leave their homes except for shopping, sports or medical care. This procedure is applied from the age of 12 and unannounced checks will be carried out.

About 65% of the population has a full vaccination schedule, a figure lower than the European average of 67%.

– Germany: Towards a massive return to remote work –

Germany is preparing for a massive return to remote work, according to a bill consulted by AFP on Sunday, in a bid to stem a new wave of the pandemic.

The reintroduction of the homework rule, which was lifted in early July, comes as Germany faces an alarming resurgence of the pandemic.

With 289 cases per 100,000 people, the infection rate reached a new record in Europe’s most populous country on Sunday.

After the United States, Israel gave the green light on Sunday to vaccinate children aged 5-11 with doses of Pfizer/BioNtech in hopes of stemming the Covid-19 pandemic.

Morocco, an important tourist country, decided to strengthen border controls due to the increase in pollution cases in Europe.

In addition to the mandatory health permits and negative PCR tests, upon arrival in Morocco, a double check will be carried out by thermal cameras and electronic thermometers, as well as antigen tests.

These measures concern all people coming from the so-called “List B” countries, namely France and several European Union countries as well as the United Kingdom, Algeria and Tunisia.

– Postponement of the obligation to vaccinate in Martinique –

In the face of opposition from hospital unions, the French government decided to postpone the vaccination obligation for caregivers to December 31 on the island of Martinique in the French West Indies.

Free public testing will also be maintained until this date, which corresponds to the end of the health emergency in this outdoor department.

The epidemic has claimed nearly 5.1 million lives worldwide since the World Health Organization office in China reported the outbreak in late December 2019, according to a count calculated midday Sunday by AFP from official sources. 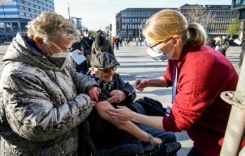 The World Health Organization (WHO), taking into account the increase in deaths directly and indirectly related to Covid-19, estimates that the epidemic toll could be two to three times higher than that officially established.

© 2021 AFP. All copyrights and representations are reserved. All information in this section (submissions, images, logos) is protected by intellectual property rights owned by AFP. Consequently, none of this information may be reproduced, modified, redistributed, translated, commercially exploited, or reused in any way without the prior written consent of AFP.